Gotham has returned to the screen this week better than ever. “What the Little Bird Told Him” (ep. 12) was possibly the best episode of the season thus far. While in the past, some episodes have felt a bit disjointed, and perhaps overly Shakespearian in delivery, this episode did not. There was less (unintentional) camp, and more thoughtful story telling.

This episode finds James Gordon (Ben MacKenzie) conditionally reinstated as a detective. He cuts a deal with the Gotham city Commissioner that he will get his badge back if he finds a particular baddie who escaped from Arkham Asylum during his tenure there as a security guard. The pieces of Fish Mooney’s (Jada Pinkett Smith) plan begin to come together as she tries to take over the regime from Carmine Falcone (John Doman). Cobblepot, AKA Penguin, (Robin Lord Taylor) has his hand in the dealings of Don Maroni (David Zayas) and Falcone. We also begin to see more of Edward Nigma (Cory Michael Smith) and his work with the GCPD and persona life. 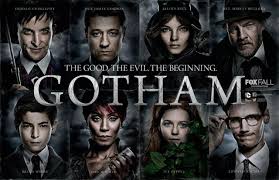 Overall, the episode was a pleasant surprise. Although there are a few storylines that seem haphazardly thrown in – such as Jim Gordon’s potential relationship with the doctor from the asylum and his ex-girlfriend checking in to stay with her parents. One can hope those ideas will be further developed and will pay off by the end of the season, but at this time they don’t seem to fit into the same puzzle as the other characters.

The “old school” gangster vibe was clear in this episode, especially with plays for power within the crime families of Gotham. This is a strength of Gotham as it strives to create a film noir atmosphere with the environments, vehicles, etc., while it also plays to the modern day viewer with modern technologies (like cell phones). This has been a unique creative choice for the show, and ep. 12 built on that foundation and strengthened it.

At some points, I have wanted to give up on the show due to poor script writing and over-acting, whether purposeful or not. However, this episode has given me renewed interest in the show and I’m excited to see what next week will bring. DC is holding on with Gotham.

Stayed tuned to Fox on Mondays at 8/7c for more Gotham.